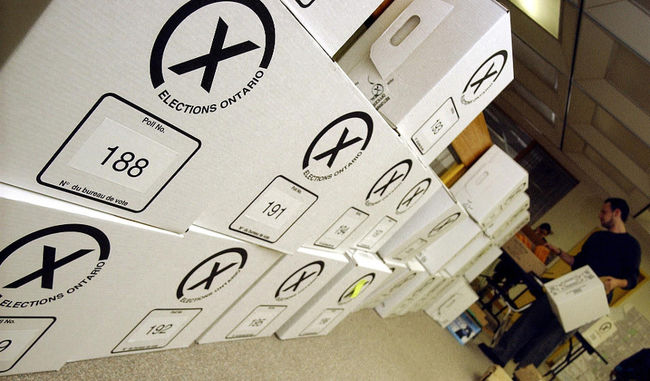 TORONTO – Think of this Ontario election as a breakfast buffet.

You roll in late after a rough night and all that’s left is stale toast, congealed eggs and saggy-ass bacon.

“What’ll you have?” the cafeteria lady — or poll officer — asks.

You retch, turn up your nose, and sputter: “None of the above!”

Don’t you wish you could?

God bless ’em for trying, but Kathleen Wynne, Tim Hudak and Andrea Horwath will never be confused for Lincoln, Laurier and Tommy Douglas.

Wynne clings to power like a tick to a hound, with Horwath the tick and Hudak the hound.

Combined, they give meaning to that trendy word, “meh.” And now, they’re talking coalitions. Blech.

Technically, you can shun them all, and send a message to boot.

The law allows you to march into that polling station, get your ballot, then hand it back unmarked. They have to record your rejection as “none of the above.”

But no one knows that. Political parties sure don’t tell you.

Of course, you can spoil your ballot, doodle on it, pee on it, or burn it. You’ll feel better — then go to jail for public indecency or arson.

The “none-of-the-above” movement is growing globally and this month gained a foothold in Ontario.

Do not underestimate the power of None.

Nevada voters have a “None of these candidates” option on ballots.

“None” actually won a primary for a congressional seat there. The chump who finished second got the nod, but I bet he was embarrassed.

None of the Above (NOTA) got six million votes (1.1%) in India’s general election this month, its first time on the ballot.

India’s supreme court declared last fall that “democracy is all about choices and voters will be empowered by this right of negative voting.”

So there’s a “None” button on voting machines in the land of Gandhi.

Which brings us back to the Ontario election, and the launch last week of the None of the Above Party.

It has candidates in eight ridings, including Scarborough-Rouge River and Parkdale-High Park and four in Mississauga.

He’s an inventor and sells defibrillators. He is trying to shock some innovation into our politics.

None of the Above almost went nowhere fast. Vezina had to threaten court action before Elections Ontario relented on the party name.

Now, he’s None of the Above.

“I just reached the point where I realized even the Green Party had become like the major parties,” he tells me. “It’s all about the leader. We’re governed by people in the leader’s office, and we don’t even know their names.

“I saw ‘none of the above’ happening in Europe and India as a way to get people off their couches and make a difference.

Good luck. You’ll need it. The 2011 election — which stuck us with Premier McWynnety — garnered just 49.2% turnout. In a sense, “none of the above” won, but it was a wussy victory.

“People who stay home make a big mistake,” says Vezina. “They let the whiners and the special interests control the vote.

“People have just given up, but giving up is never the right thing to do.

“MPPs need to be accountable to constituents first, not the leader, and we need tools of direct democracy, like recall rights and referendums.”

“We’ve had enough. We’re mad as hell and we want politicians to know None of the Above may not defeat you (June 12), but we’ll build a base and beat you next time.”

As a None of the Above premier, says Vezina, he’d recruit the best talent from other parties to his cabinet — and even step aside if another MPP is better for the job.

Dream on. But the buffet sure sounds appetizing.