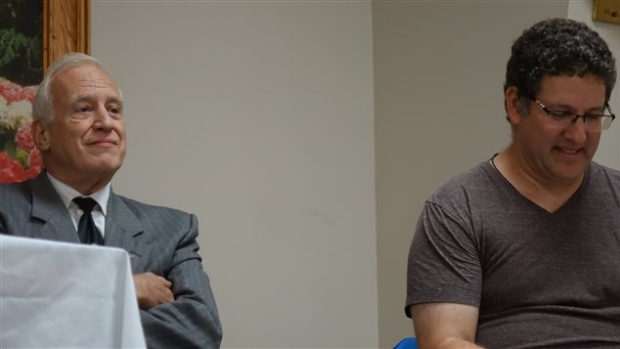 Candidates from two fringe parties tried to join a debate for the provincial Ottawa-Vanier byelection, despite a lack of invitation, until police were called to escort them out on Thursday night.

There are 11 candidates running to replace long-time Liberal MPP Madeleine Meilleur, but debate organizers only invited candidates from the Liberal, Progressive Conservative, New Democrat and Green parties to the Knights of Columbus Hall on McArthur Avenue.

John Turmel, from the Pauper Party of Ontario, and a man who legally changed his name to Above Znoneofthe, so that his name could appear at the bottom of the ballot for the None of the Above Party, joined the four invited candidates on stage.

Above Znoneofthe, formerly known as Sheldon Bergson, originally changed his name to run in the Whitby-Oshawa byelection last February.

Even as those who came to watch the debate shouted for them to leave, the candidates remained on stage until police arrived and escorted them out.

The debate then started, 20 minutes late, focused on hydro rates and a potential truck tunnel under King Edward Avenue.

Ottawa-Vanier voters have elected a Liberal in 13 straight elections dating back to 1971, but the party has been harshly criticized for the province’s rising hydro rates — and opposition parties are trying to use that to their advantage.

Today is the last day of advance voting in the Ottawa-Vanier byelection, which will be held on Nov. 17.